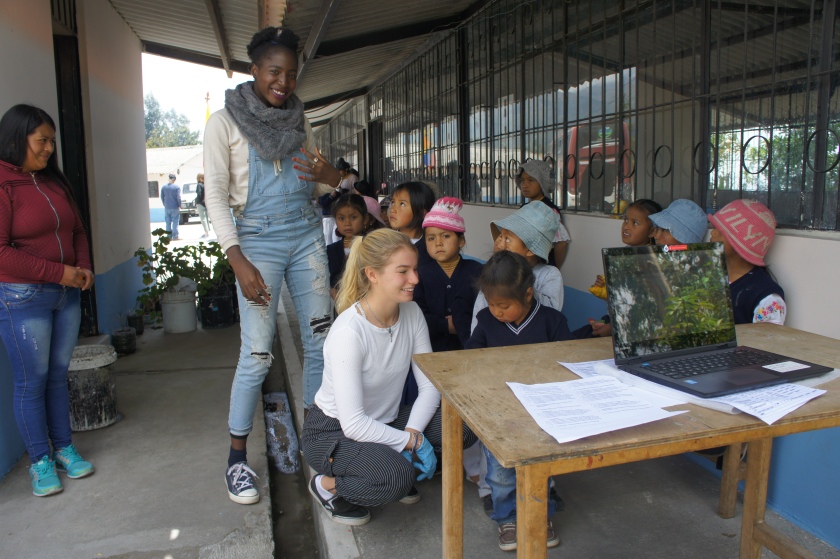 The Tandana Foundation has a health care program called the Healthcare Volunteer Venture (HCVV)- a program in which the foundation brings  groups of volunteers (both skilled and unskilled in the medical field) from the United States and Canada to provide a phenomenal mobile clinic in some of the indigenous communities of Highland Ecuador. The program happens twice a year, and the foundation held its 23rd and 24th mobile health care clinics in April and September of 2018.

This blog post is dedicated to my experience participating in and observing our staff and volunteers throughout this journey of healthcare and fun.

The experience began with a three-day staff training program covering various topics, including individual tasks, volunteer management, logistics, and a schedule for events and activities. On a Saturday evening, we welcomed our first group of 13 volunteers at the hotel Casa Latitud of Otavalo. On Sunday, we held our orientation and training of the volunteers and had a sumptuous dinner.

The journey of healthcare and fun began on Monday morning, when a bus full of 11 Tandana staff, 13 program participants, four Tandana scholarship students, and other local team members left Otavalo and headed towards Guachinguero. I could feel that some people who have come back many times to our HCVV were relaxed while others, including me, were nervous. One of the participants, Darrell Templeton, an engineer from Middletown, Ohio, had similar thoughts: he “expected to be a fish out of water” because in his own words, “I am an engineer, I faint at the sight of blood, and I have no skills in the medical field,” and he thought he would not be helpful to the cause. At the end of the week when I spoke to him, he was really proud of his contribution and glad that he came. When I asked him why he decided to come despite not having skills in the medical field, he said, “I have more than I need in life and other people have less, wherever and whenever I can help the less fortunate it is the right thing to do,” and that he will do it over and over again. People like Darrell and I found that even though we had no experience in the medical field we were able to help, and that is what is beautiful about this program. It brings together people from different backgrounds and qualifications, to work collaboratively to provide health care to communities in need. The bus ride was short and fun, we were chatting and getting to know each other and that helped calm my nerves.

I think the real journey began when we got to Guachinguero, because I had thought in hypotheticals. When the bus came to a stop and I could see children running is when it all became real… I was there! With the help of the community, we unloaded the medical supplies from the bus and helped set up the stations. The mobile clinic provided services including dental, vision, medical, pediatrics, laboratory services, and others.

For the first three days, I worked as a digital record scribe for the pediatrics department. It was the most fun station and everyone was amazed by how cute the children looked dressed in their school uniforms or wearing their traditional clothes. The children were as young as two years old and as old as 13. There were three other people in my team and in the three days I worked with them, we attended to 136 children.

In my group, we divided the tasks among ourselves. I was the first person the children would see, and I had two tasks. I had to update the children’s record when in the system or create a new record when it was their first time. I had to record the weight, height, and temperature of each child as my teammates were measuring them. The second person checked the weight and height of the children. The third person, a nurse, examined them and referred them to a doctor if they showed any signs of sickness. The last person, who I believe was the favorite of all the kids, took their temperature, gave them an antiparasite pill to chew, and FINALLY a sticker of their choice.

We even had some kids coming back trying to sneak in and get another sticker, but we spotted them easily and that was a lot of fun. The funniest moment, in my opinion, was when a cute little boy from pre-k came to me. I had to put his information into the system but still wanted to talk to him. I started the conversation by asking his name and he told me. By that time, my team had already gathered around us (yes, he was that adorable). I asked him how old he was and he answered “10 years old”, we all busted out laughing and I asked him again and he repeated the same thing. The teacher corrected him telling me he was only two years old. There was no way he was 10 years old and we knew that but he was so sure of himself that it was the cutest thing ever. I then asked the teacher why he thought he was 10, she explained that he started pre-k only a month ago and that most kids of his age will tell you random numbers they heard from their siblings or older children of the school because they are too young. When I looked at him, he was looking at me unaware of the attention he was getting and my heart melted. Guess what I did next…? Yes, you probably got it right, I walked him through the whole thing and at the end put two stickers on his hands. He was so happy that he kept coming back around me, that made my day. Working with children is not easy but these kids were so adorable that I woke up the next day eager to go back just so I can interact with them.

For my final two days, I worked in the intake station, which consisted of checking patient information, writing the reason for their visit, and taking their pictures before my colleagues took their vitals. For those two days, my station saw almost 100 patients.  At first, I was sad about leaving the pediatric station and was not sure if there would be kids in the intake station. The worry disappeared when I saw the mothers coming with their kids to my station and it became more fun for me. One thing for sure, with my limited Spanish in the medical field, I had to use a lot of gestures to communicate with patients about which part of their body hurt and figure out the reason behind their visit. Thinking about my performance now, I am sure some of the people I served were wondering what I was doing, but let me tell you something: it worked very well for me.

The communities were nice and provided lunch for us in each of the locations we worked in and we were able to interact over deliciously cooked meals. The participants were able to interact and learn about the communities through our various activities, including visiting an indigenous family to learn about their culture, visiting the Cotacachi leather market, visiting the Cuicocha Lake and the Condor Park, and finally on Saturday we had a picnic at the Lechero, a beautiful historic site. Kelli Russell, one of the participants from California who read about Tandana in the L.A. Times and decided to volunteer, told me that “the week was a positive experience” and “I will redo this experience again because it is not only a volunteer experience, but you also get the cultural experience during the week.” This resonated with many of the participants who told me that they feel like they would not have had this much fun and interaction with the local communities if they had come here for a vacation instead of as volunteers for our program.

This week was very important for me both professionally and personally because of many things. First, it was a successful mobile clinic and I was proud to be part of something so useful for the indigenous communities living in the areas we serve. Second, I gained a lot of useful skills from using the medical records software we used and from working in different teams. Third, it helped me see the amazing work Tandana is doing in collaboration with these communities. Lastly, helping people has always been my passion and I am glad I got to help these vulnerable communities with little to no access to medical treatment. Also, many if not all of the communities attended the healthcare session in numbers. Some of them came from areas with no public transportation services and had to climb mountains to make it to us and Tandana had sent buses to pick up people from other communities as well. This work had a tremendous impact on those communities and it felt great being a part of it.